PSL gear and customer service are both fantastic. Vision specifically is unrivaled in his ability to ...
19-07-2020
Post By Matt 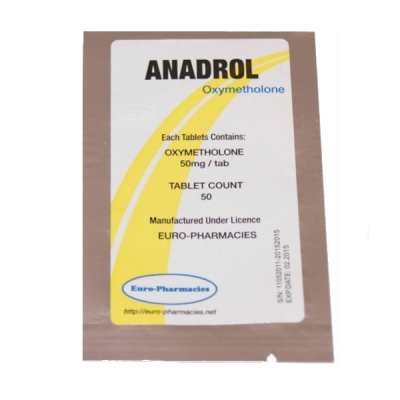 Anadrol (oxymetholone)
Anadrol 50mg was originally made as a compound to help with anemia, and has since been used very effectively to assist people who are suffering from other diseases where the loss of weight is a concern. Clearly it is a successful steroid for promoting gains in weight & strength, increasing your appetite, and increasing Red Blood Cell production. Along with most Anabolic Steroids, it has its downsides too.

Anadrol will slow down your body’s natural production of hormones such as testosterone and can negatively affect your blood lipids. It can cause water retention, and is also greatly liver toxic, it has a bad reputation for hepatoxicity, when compared with all of the steroids available. Although one of the benefits is that it can be used to stimulate weight gain through increased appetite, taking too much may actually reduce your appetite.
Anadrol is a DHT-derived compound, and is 17-Alpha-Alkylated steroid, meaning that it has been changed at the 17th carbon position to survive oral intake. The majority of oral steroids are 17aa, and this makes them go through your liver and retain a useful form. The modification which makes it possible for Anadrol to carry on through its first pass of your liver also makes it taxing on your liver. People are generally told to limit their intake of Anadrol to 4 weeks or less although I think you can easily run it for 6 weeks or more.
Since Anadrol is derived from DHT, it cannot truly convert to estrogen, and it’s not a progestin or a compound with progestenic activity& so the estrogenic side effects produced by it are of a very mysterious nature. It has been speculated that perhaps it can stimulate the estrogen receptor without actually being converted to estrogen. However, when anadrol has been used in studies to alter the female reproductive cases, it has lowered plasma progesterone levels. Many have found that taking Letrozole (again PCT stuff) can greatly reduce or even eradicate many of the more obvious side effects of Anadrol, such as bloating.
The sides from this drug are definitely a serious matter, but are easily avoidable, and controllable. One study showed very few sides for subjects using up to 100-150mgs of anadrol per day. Evidently Anadrol's hepatoxicity has been a bit exaggerated by some users in the past. Despite that, my implication is still to limit Anadrols use to around 6 weeks, although it has been known for many users to go longer than this duration. Anadrol is often used to kickstart a cycle for quick gains which can be up to 1 pound per day for the first 2 weeks, which is not uncommon. Gains are also just as quick to disappear upon termination of its use. Using anadrol for kickstarting is the most popular method of the use for this drug for athletes and bodybuilders today. This drug is massively popular with strength athletes who do not have to worry about weight classes, and with power lifters in the heavier weight brackets. Anadrol is a very potent addition to any bulking stack, because it will not be competing for the same receptor sites with the other steroids you may be using.
Anadrol is one of the small number of steroids where the dose respondent curve flattens out very quickly. When you take 50mgs per day of the Euro-Pharmacy line, you will make some very good gains. When you take 100mgs per day, you will make even more gains. Yet, it has been found that 100mgs per day is as effective for weight gain as 150mgs per day but produces less side effects and was less toxic.
On a scale 1 to 10, with 10 being the highest gains, With Anadrol Weight Gain is a 10, Strength Gain is a 10, Fat loss is a 2, and Side effects are a 10